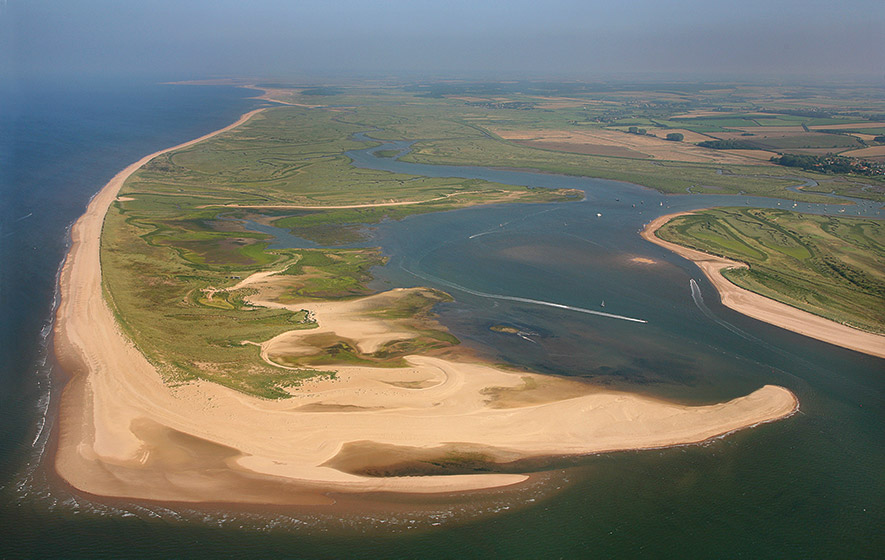 Coastal landforms developed in the Holocene period (i.e. since the end of the last Ice Age) between Holme-next-the-Sea and Weybourne, including the processes that have given rise to the landforms (and continue to act upon them) and their geology; and also relict landforms and their geology and archaeology in the dynamic coastal zone.

The below map shows the location of the North Norfolk Coastal geological landscape. Click through for a higher resolution version. 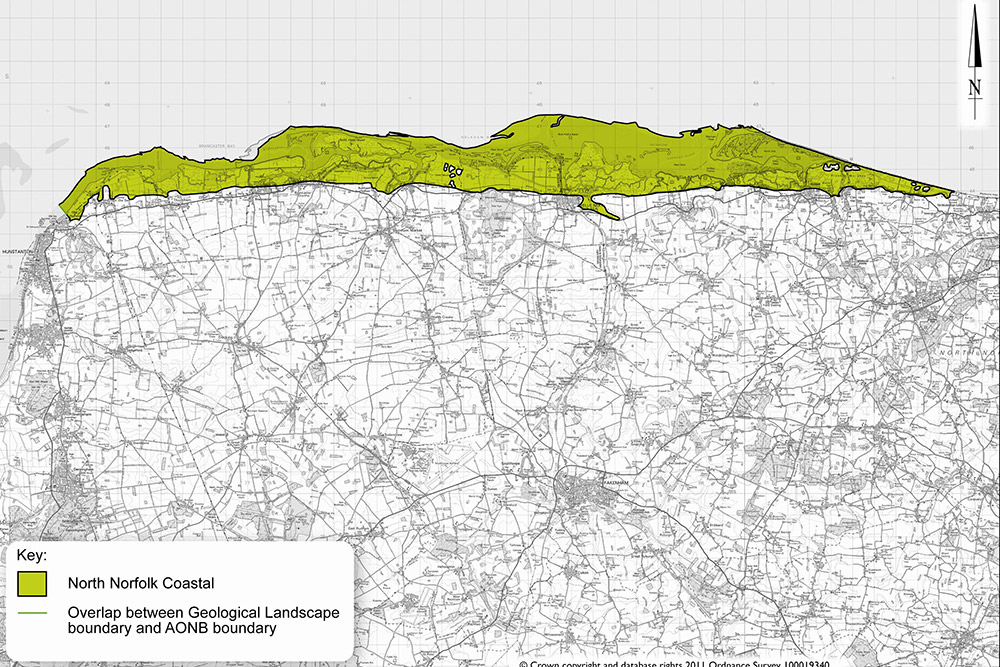 The north Norfolk coast is famous for the wind-swept beauty of its landscape, where sea, land and sky combine in harmonies of muted colour and horizontal variations of sand, mud and shingle. This is a dynamic coastline, actively formed and reformed with every tide; storms and onshore gales may reshape its details literally overnight. But there remain at its core a suite of landforms which have attracted scientific attention as well as admiring visitors over many years. The north Norfolk coast between Holme-next-the-Sea and Weybourne is one of the best places in Britain to study coastal processes and landforms. It comprises a 40km stretch of intertidal sands and muds, salt-marshes, shingle banks and sand dunes, and its star features include the shingle spit at Blakeney Point and the offshore shingle bank at Scolt Head. Scientists have studied the coast at depth too, making boreholes and taking core samples to increase our understanding of the three-dimensional geometry of the buried layers of sediment, and hence understand how the area has evolved over the last 10,000 years. What we see today is a snap- shot in time of a slowly-changing whole, with both durable and more ephemeral elements. A key factor is the availability of abundant soft sediments: sands, gravels and muds are derived from glacial deposits offshore and from the cliffs to the east, and are readily shaped by wind and water, erosion and deposition. The result is a true wilderness, a dynamic coastal zone where natural processes rule.

At the end of the last Ice Age around 10,000 years ago, the coastline was many miles away in what is now the North Sea basin, as sea levels were over 50 m / 165 ft lower than at present. A viewer standing on the edge of the north Norfolk plateau or the Cromer Ridge looking northwards would have seen a ‘steppe’ landscape similar to that seen today in northern Europe and Asia, with patchy trees, lakes and rivers stretching as far as the eye could see. This lost area has been called Doggerland. Rising sea levels caused by melting glacial ice progressively invaded the North Sea basin in the Holocene, reducing Doggerland to a series of islands and then finally submerging it. The shape of the present Norfolk coastline was more or less established by about 6,000 years ago. Since then relative sea levels have risen more slowly, with fluctuations leading to some local advances and retreats of the coastline, particularly in the stretch around Thornham.

The submerged landscapes of the north Norfolk coast can be appreciated at Holme-next-the-Sea and Titchwell. Displayed on old maps as ‘Remains of Ancient Forest’, a succession of prehistoric terrestrial and salt-marsh deposits is being eroded and exposed at low tide, including freshwater peats and the trunks of fallen pine trees. Flint tools of Late Glacial hunter-gatherers have been found at the base of the lower peat at Titchwell, dating back over 9,000 years ago. At Holme on the foreshore, timbers of the famous Seahenge ritual monument have been dated to the early Bronze Age, about 4000 years ago, when this site was woodland.

Note: The peat beds are fragile and easily damaged, as well as being important feeding areas for birds. Please avoid walking on or damaging the peat, and help others to understand its sensitivity.

Blakeney Spit and the barrier beach of Scolt Head Island are two of the best known coastal landforms in Britain. They are founded on ancient storm beach bars (ridges of inter-tidal gravel). The source of much of this gravel is likely to lie offshore, and the core of their structure is thought to be at least 4,000 years old. They have recurved tips shaped by long-shore currents, and relics of their gradual westward progression can be seen as a series of curving beach ridges partially buried in the tidal and salt-marsh sediments which have accumulated in their lee. Evidence from old maps shows they are moving westward at about 3 m (10 ft) per year and landward at about 1 m (3 ft) per year. Thus, the coastal zone is gradually narrowing, squeezed between the North Sea and higher ground to landward. In due course, the ‘eyes’, a series of relict mounds of gravel in the marshes deposited by the most recent (Devensian) glaciation, notably between Blakeney and Salthouse, will be eroded as the coast continues to retreat southwards.

Extensive salt-marshes have developed over thousands of years in the shelter of the Scolt and Blakeney barrier systems. Silts and muds are able to settle out in quiet backwaters, and are colonised in time by a succession of plants beginning with algae, followed by Zostera (eel grass) and Spartina (cord grass) which stabilise the sediment. A zone of salt-marsh now fringes the coast in many places, drained by large channels such as Blakeney Pit and a maze of small, winding creeks. Upper salt-marsh environments may become permanent features and may provide grazing over the centuries, as at Stiffkey. In recent centuries many areas of salt-marsh have been reclaimed by building sea walls and so converting tidal land to grazing marsh. A notable example is Wells, where the Beach Road embankment was built in 1859 and land to the west taken into agricultural use.

The North Norfolk coast has abundant supplies of sand. Wide sand flats are formed in the lower part of the intertidal zone, washed by each tide and whipped by the wind. Bob’s Hall Sand at Wells is over 5 km2 (2 sq. miles) in extent. Dry sand is readily blown from these flats to form drifts and dunes where it is trapped along beach ridges and colonised by marram grass. This process can be seen well at Holkham Meals, where a dune system up to 6 m (20 ft) high and over 2,000 years old has developed west of Holkham Gap. By contrast, an old map shows that the dune system to the east of Holkham Gap is no older than the 18th century. Large areas of dune were stabilised in the 19th century by being planted with Corsican pines by the 3rd Earl of Leicester. Dunes are vulnerable to pressure from human activities, and blow-outs may occur where visitor footfall has eroded their stabilised surface.

The changing coastline has led to fluctuating fortunes for local harbours and landing places. The Medieval ports of Blakeney, Cley, Morston and Overy Staithe have declined due to silting. The harbour at Holkham Staithe was destroyed by the unintended effects of salt-marsh reclamation in the 19th century, and the port of Wiveton has also completely disappeared.

In this current era of global warming, local sea-level is predicted to rise by as much as 50cm (19”) by 2050. As the coastal zone continues to become narrower, previously reclaimed salt- marshes may once again become tidal, opening up new areas of wildlife habitat and helping create buffer areas against the effects of flooding.

What is an Area of Outstanding Natural Beauty >