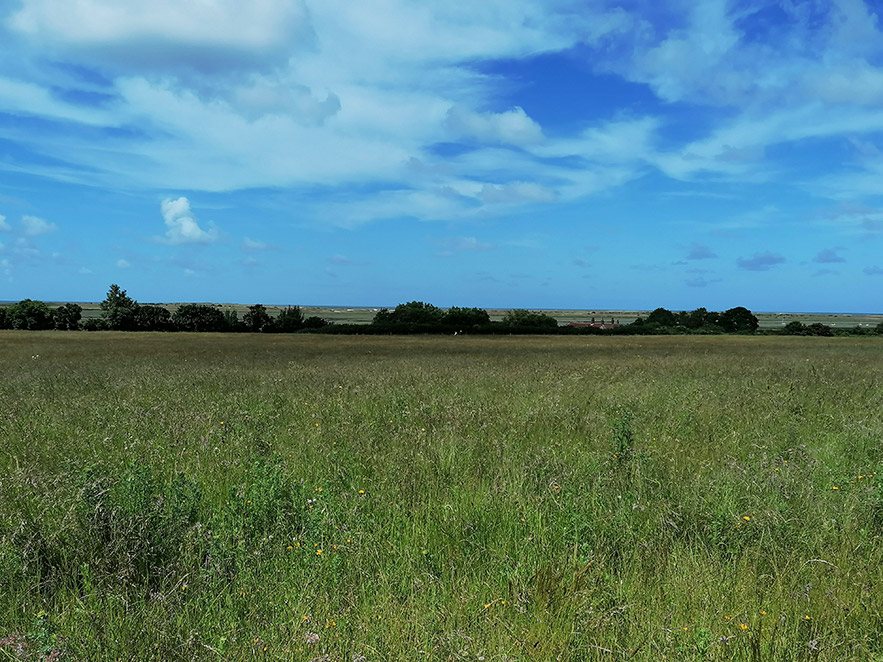 May-July is generally the best time to see grasslands, when a wide variety of plans will be flowering and butterflies and other invertebrates will also be active.

Grasslands are habitats that are prevented from undergoing natural succession to scrub and woodland by management, normally by regular cutting and/or grazing. The variety of grassland types is a product of the interaction of natural factors, such as soil type and availability of water, with human management. Apart from the grass- lands of coastal grazing marshes, the grasslands of Norfolk are generally the product of ancient deforestation followed by centuries of grazing by cattle, sheep, ponies and other livestock.

Agriculturally unimproved, species-rich grassland exists on soils with low nutrient levels. Cutting for hay removes nutrients, keeping levels low and helps to maintain the diversity of the sward by avoiding a build-up vegetation which swamps less competitive plants. Application of fertiliser to grassland favours productivity of a few coarse grass and other plant species at the expense of diversity. Species-rich grassland supports a wide diversity of invertebrates, as well as birds and animals higher up the food chain, but it is a habitat that has declined drastically in national terms as a result of agricultural intensification.

In the Norfolk Coast area, agricultural grassland is a minor component of the largely arable farm- land, and species-rich grassland is relatively scarce. There are small areas of chalk grassland in the north and north west of the area, reflecting its geology in common with the Yorkshire and Lincolnshire Wolds and chalk grassland habitats in the south of England.

Some areas of cliff-top grassland which have avoided cultivation or enrichment are rich and diverse in both plants and invertebrates. There are also areas of what might be considered grassland within some of the other habitat types described in these information sheets – for example in stable dunes (maintained by rabbit grazing), grass heath, coastal grazing marsh and cliff slopes.

Small patches of any type of dry grassland may also be found in other sites which have never been treated with fertiliser – gardens, old churchyards, old paddocks and some road verges. All benefit from traditional management such as hay-cutting at the appropriate time of year and grazing by livestock.

Public access to limited areas of species-rich grassland can be found at:

Light grazing is generally used to keep succession to scrub and woodland in check and prevent excessive bracken invasion. A rotational grazing system promotes diversity and ensure that there are areas where plants can flower and set seed.

This document lists the Roadside Nature Reserves across the Norfolk area.