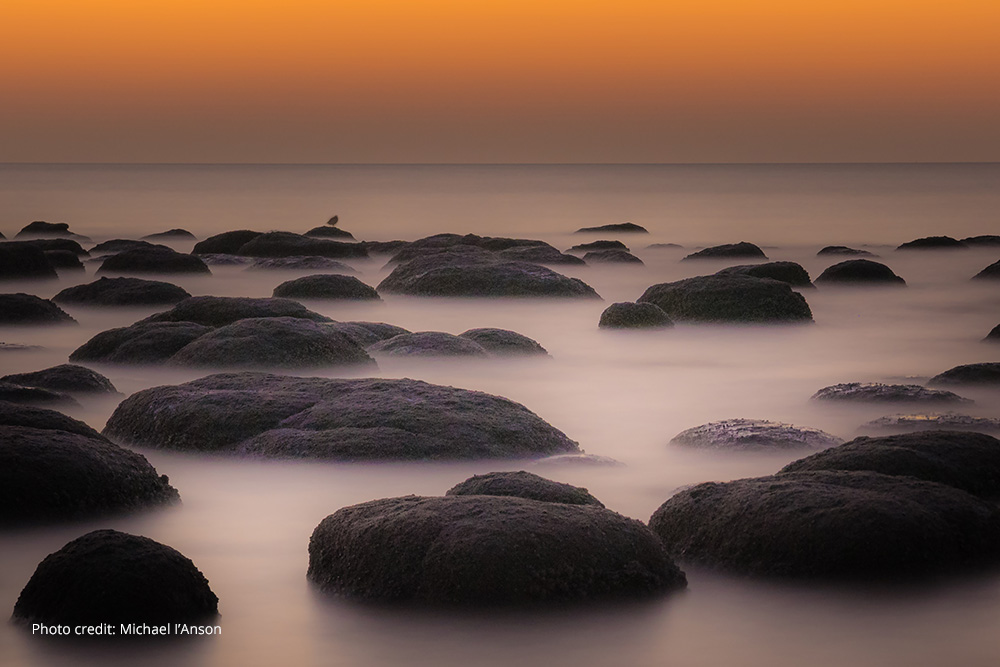 A discontinuous line of low sandstone hills overlooking the eastern Wash in the western part of the AONB, running approximately north-south between Snettisham and Castle Rising, with associated superficial deposits.

The below map shows the location of the West Norfolk Sandstones geological landscape. Click through for a higher resolution version. 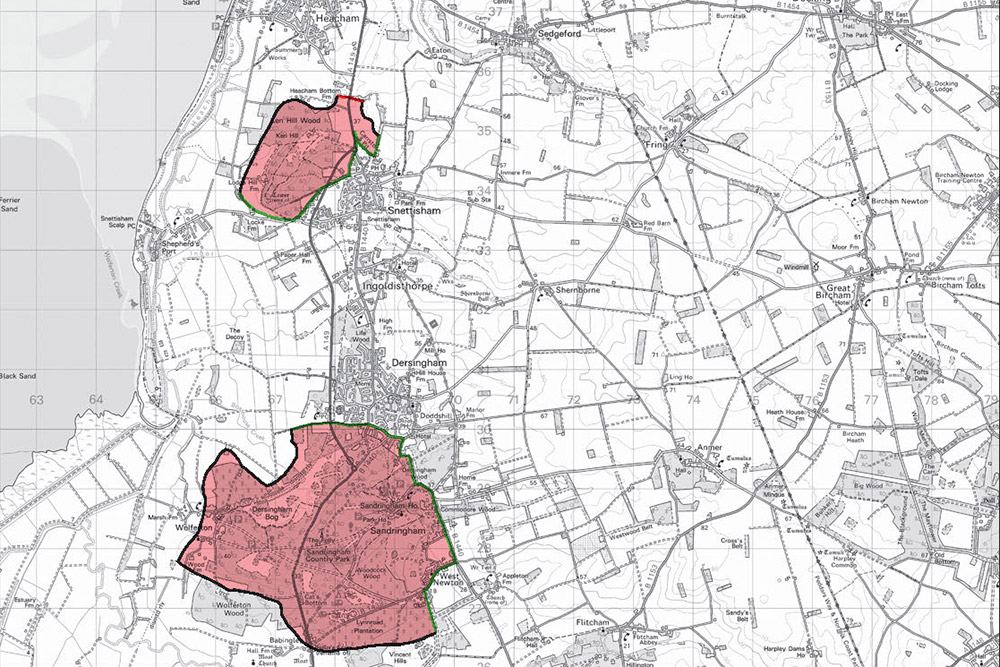 Rising to a maximum height of 42 m (138 ft), this geological landscape includes wooded knolls at Snettisham and Sandringham which provide fine views over The Wash as far as Lincolnshire. These sandstones were laid down in the Lower Cretaceous period between 144 and 110 million years ago; they have since been tilted by earth movements and sculpted by glacial erosion to leave upstanding remnants with the overlying layers of rock removed. Their acidic, sandy soils have given rise to tracts of heathland at Castle Rising, Sandringham, Dersingham and Snettisham. (As a backdrop, a few kilometres inland another glacially eroded escarpment of hills rises to over 70 m (230 ft); this is the rolling downland of west Norfolk developed on Upper Cretaceous Chalk.)

The bedrock geological layers visible in this part of the area begin with the Sandringham Sands, followed by the Dersingham Beds overlain by the Carstone. They were laid down in shallow tropical seas, and contain different layers with variations in hardness and chemistry.

These variations in rock type are important from a landscape point of view. The harder sandstones form durable, terrace-like features; they may also act as impermeable layers, obstructing the flow of percolating groundwater and giving rise to spring-lines. Clay-rich layers also act in this way. By contrast, loose sands are freely draining, and are easily eroded by wind and water to form aprons of sandy material at the base of slopes, and locally may even form dunes. The result is a local landscape of great variety and charm, with slopes, scarps, plateaux and spring-lines formed at different levels.

Ken Hill and Lodge Hill form a prominent scarped feature at Snettisham. A walk through the woods will reveal stepped contours around the hill, which are founded on a sequence of Leziate Beds overlain by the Dersingham Beds and Snettisham Clay, with Carstone capping the plateau. A mantle of down-washed sands has masked the underlying geology, although weathered Carstone can be seen and appreciated in an old quarry near the footpath above Lodge Hill Farm. Damp patches may be seen where springs are active above impermeable layers, or where a thickness of poorly-draining ‘head’ material has been deposited at the foot of slopes by ‘solifluction’ (seasonal soil creep in a cold, ‘periglacial’ climate), as at Ken Hill Wood. At nearby Snettisham Common a sand pit near the old railway line was dug into the Leziate Beds in the 19th century for making glass. Carstone is a feature of many walls in Snettisham; it has been quarried for many years in the village, witness the series of quarries at Norton Hill; some are now grassed over but one is still active.

The best place to see landform features associated with this Lower Cretaceous geology is the Dersingham and Sandringham area. Selectively cleared of tree cover, an impressive escarpment may be seen overlooking the National Nature Reserve at Dersingham Bog. Here, sands of the Leziate Beds are capped by the harder, iron-rich layers of the basal Dersingham Beds, giving rise to the plateau feature of Sandringham Warren. A series of bold bluffs is separated by dry valleys, and the whole feature is thought to mark the line of a former cliff in the Pleistocene period with its base some 10 m (33 ft) above present sea level. The dry valleys are the product of a process known as ‘spring-sapping’ and erosion by stream action under ‘periglacial’ conditions (close to the edge of an ice sheet). The bog is developed on layers of poorly-draining, sandy ‘head’ washed down from the Leziate Beds, and is an example of an acid mire noted for its plant species such as sundew and cotton-grass.

The Carstone forms the summit of the escarpment at Sandringham, and gives rise to scarp features in the woods and a spring-line in Sandringham Country Park. Heathland is developed extensively in this area on acidic, free-draining, sandy soils.

Southwards, the Lower Cretaceous rocks outcrop once again in the Castle Rising and North Wootton area. The Carstone is absent here, presumably eroded away by the Anglian ice sheet, so the landscape is gentler and more rounded, although it rises to an impressive 51 m (167 ft) near Knights Hill. The Dersingham Beds underlie this high ground, but they are mostly masked by a layer of glacial till. Lower down to the west, the Leziate Beds underlie local tracts of birch woodland and heather heath at Ling Common. Pits and hollows in the woods mark the site of quarries dug in the 19th century to extract pure sand for making glass. A layer of wind-blown sand was deposited here by wind action over 11,000 years ago at the end of the most recent (Devensian) glacial period, and also in Mediaeval times, when it was probably caused by a combination of deforestation and overgrazing on fragile, sandy soils. The Mintlyn Beds (greenish grey sands and clays) underlie the low ground around Wootton Carr.

More about the local landscape >