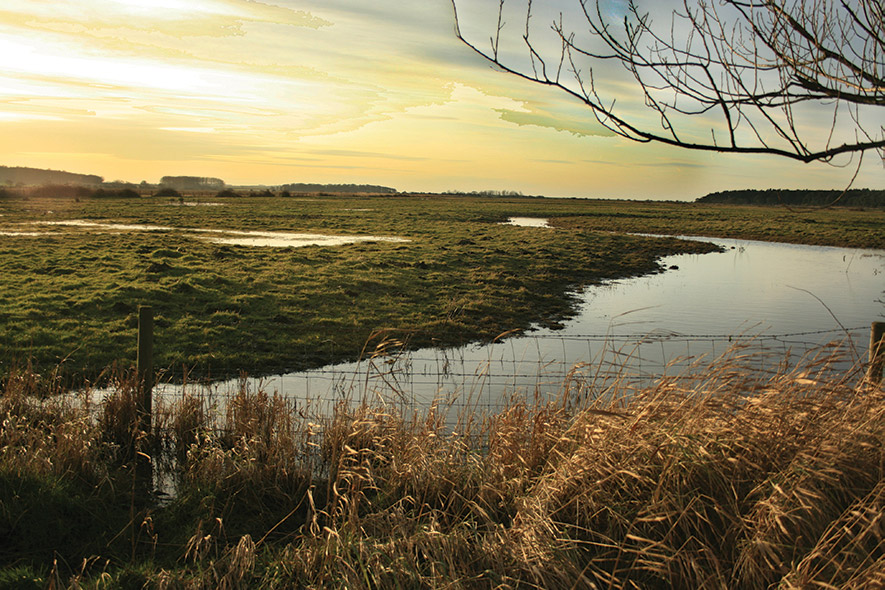 Rivers
A number of small rivers flow through the area. In the west are rivers which feed into the Great Ouse and the Wash – the Babingley, Ingol and Heacham. The Hun, Burn, Stiffkey and Glaven flow through the wildlife-rich marshland habitats of the north Norfolk coast to meet the sea. The Mun is rather isolated in north east Norfolk, rising from the glacial gravels of the Cromer Ridge to meet the sea at Mundesley.

Broadly speaking the upper reaches of our rivers are relatively swift and the lower reaches are muddier, more sluggish and often strongly affected by the tide, although tidal sluices often limit this.

Most of the area’s rivers are chalk rivers, influenced by their underlying bedrock. The permeable chalk acts as a sponge, absorbing rainfall, filtering the water and releasing it though springs and fissures. This means the rivers have a constant supply of clean, mineral rich water, and are not naturally prone to the floods and droughts associated with less permeable bedrocks and steeper river valleys. The chalk which feeds north Norfolk’s rivers stretches across eastern and south eastern England and Normandy, but is not found anywhere else in the world, making our rivers a scarce national and global resource.

Amongst these plants, a huge variety of molluscs and crustaceans thrive, building shells and skeletons from the dissolved calcium. Largest of these is the white clawed crayfish, native to Britain but now seriously endangered by the arrival of the American signal crayfish. Chalk streams are also noted for their rich insect life, and many species of mayfly, caddis-fly, dragonfly and damselfly spend their early life stages feeding in the richly productive waters.

The abundance and diversity of insect life helps sustain the communities of fish that inhabit the river. Most of these species, the brown trout, eels, brook lamprey and sticklebacks, probably colonised the rivers from the sea following the ice age, and have since been joined by other fish, including the bullhead and stone-loach. Each of these species has slightly different habitat requirements in terms of fast and slow water, clean gravels or silt beds, each of which are met in a naturally diverse chalk stream.

The rivers are also home to a variety of birds and mammals, including otters. The water-vole, which has approached extinction in much of the rest of England, still thrives in Norfolk, probably partly due to the many miles of suitable habitat, but also due to the lesser numbers of American mink. The aquatic plant-life and marshy river edges also pro- vide excellent feeding areas for moorhen, teal and the secretive wood-cock and snipe, and kingfishers are frequently seen darting along the rivers.

The north Norfolk rivers drain largely rural catchments with little industrial activity but are heavily influenced by farming practices. Over the centuries the rivers have been straightened and dredged, drained and embanked. Fallen trees, an important source of shelter and food, have been removed and in other places trees have been planted to purposefully drain springs and wetlands. Reversing these processes is difficult, but effective, and can be achieved in places without a loss of agricultural productivity. Despite historical modification stretches of these magical and unique habitats remain on north Norfolk’s rivers.

Although access to and along the rivers is limited, there are a number of places where you can enjoy seeing them and their wildlife. See ‘How to help your local river’ to find out how you can help protect rivers near you.

Stretches of some of the rivers in the area have been straightened and canalised with embank- ments to stop flooding put in place along the edges. Restoring rivers can recreate riffles and meanders and reconnect rivers with their floodplains. Woody debris in the river provides excellent habitat for invertebrates and mammals and shaded hiding places for fish. Once restoration has been completed minimal management should be required.

A recent programme of work on the area’s rivers, the Nine Chalk Rivers project, has started to address these challenges.

This project ran for three years until April 2015 and was designed to improve the functioning, quality and understanding of 9 chalk rivers on the Norfolk Coast.

How To Help Your Local River >