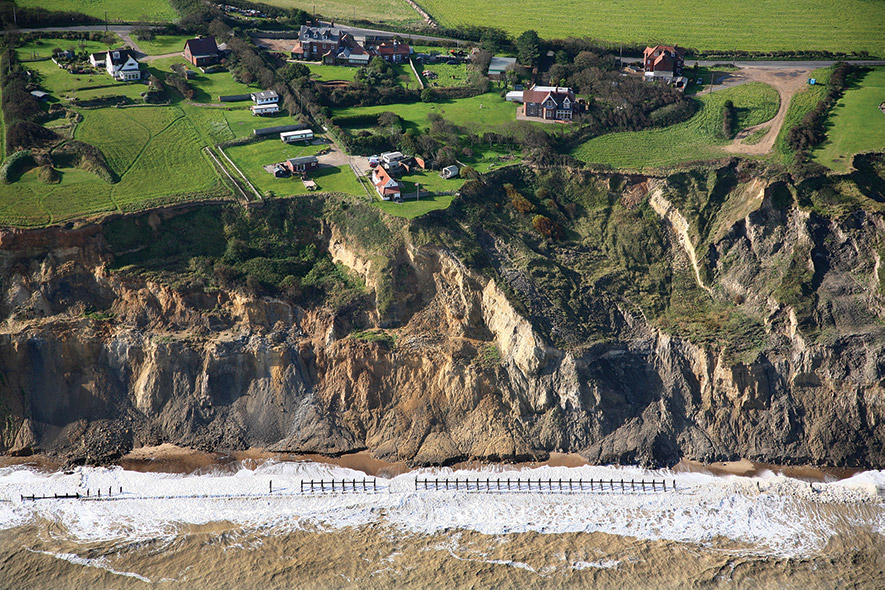 In the Norfolk Coast area, these are ‘soft cliffs’, formed from sands, clays and gravels of glacial origin with some areas of chalk either at the base or as ‘rafts’ that were torn up from the bedrock by ice sheets and deposited in the cliffs. They are unstable and subject to frequent slumping and landslips, particularly where water percolates into the rock, forming often less steep slopes than hard rock cliffs, and are therefore more easily colonised by vegetation.

The vegetation of this habitat varies according to the extent of exposure to wind, sun and salt spray; the chemistry of the underlying rock and percolating water; the water content and stability of the substrate; and the time elapsed since the last movement event. Cliff-top habitats can also be transformed by soil erosion processes.

In the west between Weybourne and Sheringham the cliffs are largely nearly vertical. At Weybourne chalk is exposed near the base of the cliffs, but by about Sheringham (Robin’s Friend) it is at beach level and extends on to the foreshore as a chalk platform, the inshore expression of an extensive offshore chalk reef. Between Sheringham and Cromer there are further foreshore chalk exposures, especially at West Runton where we find the only chalk rocky shore in Norfolk.

East of Cromer the cliffs become higher and more unstable. They are composed of glacial soils which vary from sand to chalk marl. The Overstrand cliffs are generally well vegetated but are subject to major landslides. Flushes caused by springs issuing from the cliffs are a feature. The six km stretch between Overstrand and Mundesley is the highest, reaching 60 metres in places where the apex of the Cromer Ridge meets the sea. They are very unstable and subject to frequent landslips through water draining through the cliff slip, followed by erosion by the sea from the toe of the cliffs.

The mobile nature of the cliffs between Cromer and Mundesley creates an extensive mosaic of habitats ranging from bare mud flows and dry sand through to relatively mature unimproved grassland, scrub communities, wet flushes and even small reed beds. A particular feature of these cliffs is the colourful displays of the kidney vetch in the grassland.

Soft cliffs are particularly important for invertebrates as they provide a suite of conditions which are rarely found together in other habitats. The combination of crumbly soils, hot substrates and open conditions maintained by cliff slippages offer a continuity of otherwise very restricted microhabitats and these slopes support many rare invertebrates.

Seepages, springs and pools are a feature of many soft cliffs and these provide the wet muds required by many species of solitary bees and wasps for nest building. Associated with the seepages are perched reed beds and bryophyte and rush dominated flushes. The very attractive red form of the early marsh orchid is a feature.

Clifftop grassland is important for a range of species or groups including bryophytes, lichens, invertebrates (particularly woodlice, beetles and flies), and barbastelle bat. Purple broom-rape is found in cliff-top grassland notably on Beeston Cliffs, Sidestrand and Mundesley.

Other nationally scarce species include sand catchfly at Beeston and bulbous meadow-grass at Overstrand.

The cliffs are a haven for many common grass- land butterflies and moths with large populations of Common Blue and Five-spot Burnet moth. The flushes are of particular importance for breeding Diptera and a number of rare or notable species of soldier-flies have been recorded. Rare beetles are also associated with these cliff habitats including the rove beetle and various ground beetles.

Fulmars nest on some of the high sandy cliffs at Sidestrand, Overstrand and elsewhere.
The sandy cliffs also support small nesting colonies of sand martins which create burrows in the soft faces of the cliff side.

Soft cliffs extend from Weybourne eastwards around the coast to Bacton in the area, and beyond to Happisburgh, in an almost unbroken line. A recently opened stretch of the England Coast Path provides access along much of the cliff top. Cliff top grassland is present at Hunstanton and between Weybourne and Mundesley sometimes as golf courses or caravan sites. Further east the land is generally cultivated close to the cliff edge.

The cliff slopes are inaccessible but can be viewed from the beach at low water. Glacial geology features are notable as well as their landscape and wildlife.

Depending on the ownership of the site the cliff tops can be cropped, managed as caravan sites, golf courses or left as unmanaged grassland. Each has its own management regime.

The cliff slopes are generally unmanaged and amongst the ‘wildest’, most natural habitats and landscapes in the area.