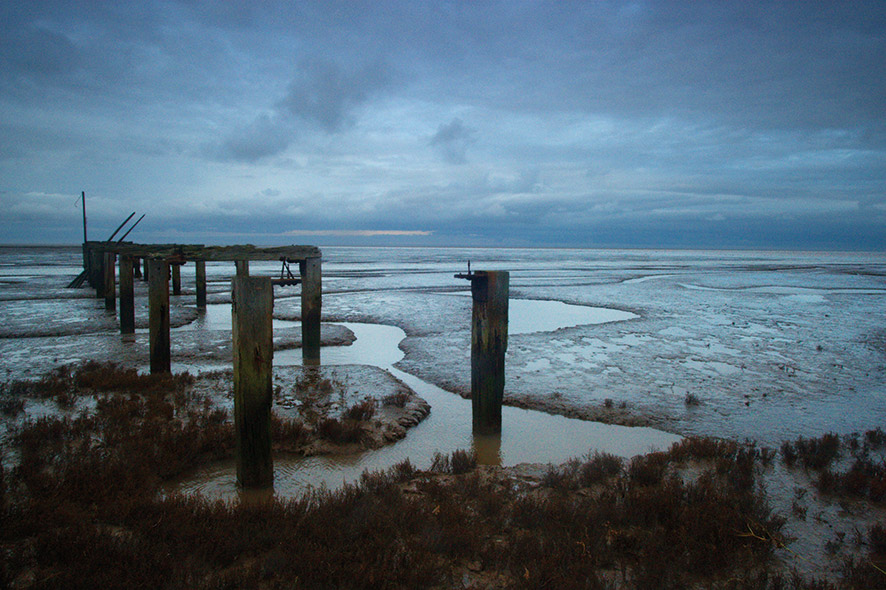 Although intertidal sand is found off the beaches of the cliffed coast south of Cromer, the main area of importance for intertidal habitats in the area is the low lying North Norfolk Heritage Coast. Here, they extend for about 35km from Holme in the west to Blakeney Harbour in the east in a belt up to 4km wide, comprising a complex of saltmarshes of over 2000 hectares together with extensive areas of intertidal sand and mudflats. About 50% of the former saltmarsh was reclaimed between the seventeenth and nineteenth centuries and is now mostly grazing marsh, with some arable farmland and also areas of reed bed.

The saltmarshes have formed behind barrier islands or spits as at Scolt and Blakeney or have extended out on to sandflats where the wave climate is favourable, as at Stiffkey and Warham. These saltmarshes are 6000 years old in places, having developed on a chalk platform overlain by alluvial deposits which may explain this relative stability. In other places, the habitats are very dynamic – for example new saltmarsh in a formerly sandy area can be seen forming in Holkham Bay. The marshes are still accreting at an average rate over the whole marsh of 2.5mm per annum, fed by the rich supply of sediment from the shallow offshore waters.

The north Norfolk coast saltmarshes are some of the most botanically rich in Britain. The slow rate of vertical accretion and lack of successional changes mean that the plant communities have a high degree of stability.

Saltmarsh is home to a characteristic variety of plants that can tolerate and thrive in a range of exposure to salt water. The lowest parts of the saltmarsh are covered at each tide, whereas the uppermost saltmarsh is only immersed occasionally on spring tides. The saltmarsh is particularly striking in mid to late summer when sea aster and sea lavender are in flower.

The rich organic substrate harbours micro- organisms that form the base of a rich food web that supports large numbers and a wide variety of wildlife. Invertebrates mine this source or filter food from the water and are in turn preyed on by birds and fish, for which the creeks and shallow waters are important nursery areas.

These habitats are amongst the most truly wild areas of the Norfolk Coast. Huge skies, sometimes filled with flocks of geese or waders, the changing light, the plaintive calls of birds, the salty wind and the smells of the mud and the marsh all contribute to a strong feeling of wilderness and remoteness.

Found along the North Norfolk Heritage Coast from Holme to Cley, but care is needed when enjoying these special and wild areas. Access across saltmarshes is not advised as the fragile vegetation is easily damaged by footfall and they are dissected by deep and muddy creeks that can fill quickly as the tide rises. The mudflats are often deep and sticky, and even sandflats can be hazardous if unconsolidated, forming quicksands.

Good places to experience these habitats and their wildlife are:

Most of the marshes have been ungrazed at least since the war – these are wild, natural habitats.

Small scale ‘longshore economy’ activities such as mussel collecting and farming, and seasonal gathering of samphire and cockles has taken place for centuries and possibly millennia.