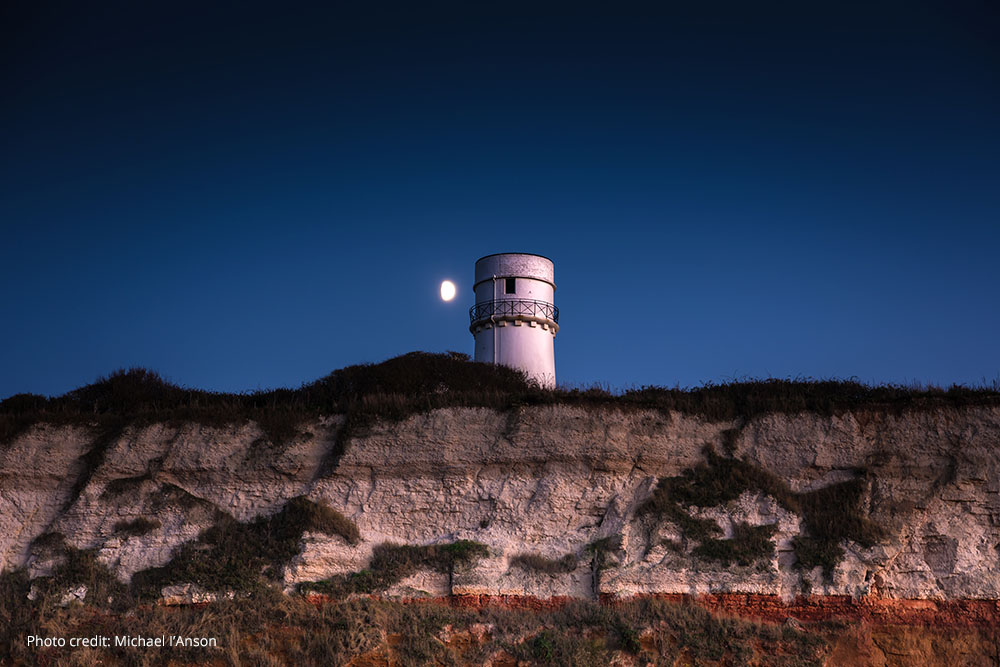 Geology and landforms in a relatively narrow coastal band from Snettisham north and eastwards to Morston, associated with the ‘Hunstanton glaciation’ towards the end of the most recent (Devensian) Ice Age.

The below map shows the location of the Hunstanton Glacial geological landscape. Click through for a higher resolution version. 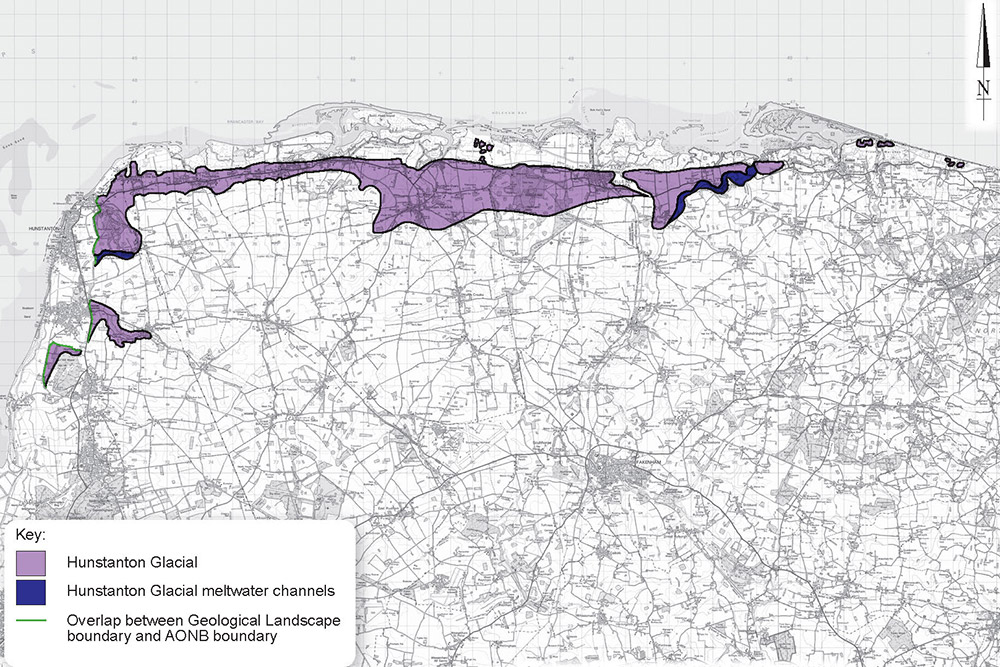 North-west Norfolk has an important Ice Age heritage. 18,000 years ago it was in the grip of the coldest part of the Devensian period – the most recent glaciation. The North Sea basin was occupied by a vast ice sheet, and a lobe of ice penetrated as far south as the Fenland basin. Devensian glacial deposits and landforms shaped the landscape of the coastal hinterland between Snettisham and Morston, during what is sometimes termed the Hunstanton glaciation.

We know that a Devensian ice sheet reached Norfolk because of the geological evidence of the Holkham Till. Formerly known as the Hunstanton Till, this reddish-brown or grey-brown sandy clay was laid down beneath the ice sheet, and contains a wide range of erratic stones (i.e. not derived from local bedrock) from as far away as southern Scotland; lumps of coal and dolerite from Northumberland mingle with locally-sourced chalk and carstone. The red-brown colour is thought to have been derived from rocks of the Triassic era (over 200 million years old) picked up by the ice sheet in the North Sea basin. The Holkham Till outcrops in stretches of ground between Snettisham and Morston, but it is rarely more than 3 m (10 ft) thick. It is found banked against Cretaceous bedrock which forms the higher ground in the area, but significantly it is not found above the 30 m (100 ft) contour; it may have been deposited by a late ice surge event which ground to a halt at this level, leaving the land over 30m untouched. Evidence of the Holkham Till on the ground is best seen in the red-brown, sandy soils of the Hunstanton Series seen along the coastal plateau, as at Holme, Titchwell and Burnham Deepdale; known, undisturbed exposures of the Till are currently few and far between. The outwash deposits of the Hunstanton ice sheet are known as the Ringstead Sands and Gravels; they form patches overlying the Holkham Till, for example at Warborough Hill, Stiffkey. There is also a series of gravel mounds in the coastal marshes east of Blakeney known as ‘eyes’, which are thought to be eroded remnants of outwash deposits.

The Hunstanton glaciation left a range of interesting features in the landscape. When the ice front advanced south-eastwards and met higher ground, lobes of ice pushed forwards into the mouths of pre-existing river valleys and blocked them. Meltwaters were ponded up there to form ‘proglacial’ lakes at the edge of the ice, and spillways were carved out as torrents of water sought outlet along the ice front. A good example of this can be seen near Warham, where the old northward course of the River Stiffkey became blocked at Northgate Hall Farm. Meltwater and river water created a lake which found outlet through a north-easterly overspill channel cut through Chalk bedrock, now forming the present valley at Stiffkey. The old Northgate valley now contains a ‘wind gap’, a section of old river valley abandoned because of river capture, and the present small watercourse in this valley, which drains into Warham Slade, is an example of what is known as a misfit stream.

At Holkham a lobe of ice is thought to have extended as far as Howe Hill, just west of where Holkham Hall now stands; the meltwaters found outlets north-eastwards through Dale Hole and the valley which now holds Holkham Lake. Another lobe of ice entered the valley at Hunstanton Park and blocked the Ringstead valley; deposits from the proglacial lake here have been found at Ringstead Common. The meltwaters carved out a spillway westwards through chalk bedrock, forming what is now a big dry valley at Ringstead Downs, thence draining into an enormous proglacial lake which filled the Fenland basin. It is quite possible that proglacial lakes occupied other local valleys, including that of the Burn. Other spillways may not be so visible in the landscape but boreholes have shown the existence of a buried channel running parallel to the coast between Brancaster and Cley; this may be evidence of a major meltwater channel draining the ice front eastwards.

Other interesting landforms from the Devensian period can be seen in this part of the AONB. The Hunstanton Park Esker is the most famous of these, an upstanding, winding ridge of sand and gravel about 2 km (1.2 miles) long, formed by a meltwater river running beneath the ice sheet as the Ringstead valley ice lobe retreated northwards. East of Heacham, the Sedgeford valley displays a range of gravel banks and mounds, thought to be ‘kames’ and ‘kame terraces’ – piles of sand and gravel formed in depressions in glaciers and dumped as they melted, and linear deposits left by a meltwater stream running alongside a glacier. Pits and depressions in Holkham Park may be the remains of kettle holes, where large blocks of stagnant ice melted out to form ponds.

We can see plenty of evidence in this part of the AONB of ‘periglacial’ processes occurring close to the edge of the ice sheet in late Devensian times, as the Ice Age came to an end. The seasonal freeze-thaw regime modified slope profiles through ‘solifluction’, as thawed soil layers sludged slowly downhill, and many valley bottoms accumulated thick layers of what are known as ‘head’ deposits by this process. Patterned ground formed by freeze-thaw action developed in some areas where chalk bedrock reached the surface, for example at Burnham Deepdale. This shows up today in crop markings – on slopes one can see a beautiful series of stripes which appear to flow downhill; on plateau areas polygonal patterns can be seen.

What is an Area of Outstanding Natural Beauty >

More about the local landscape >