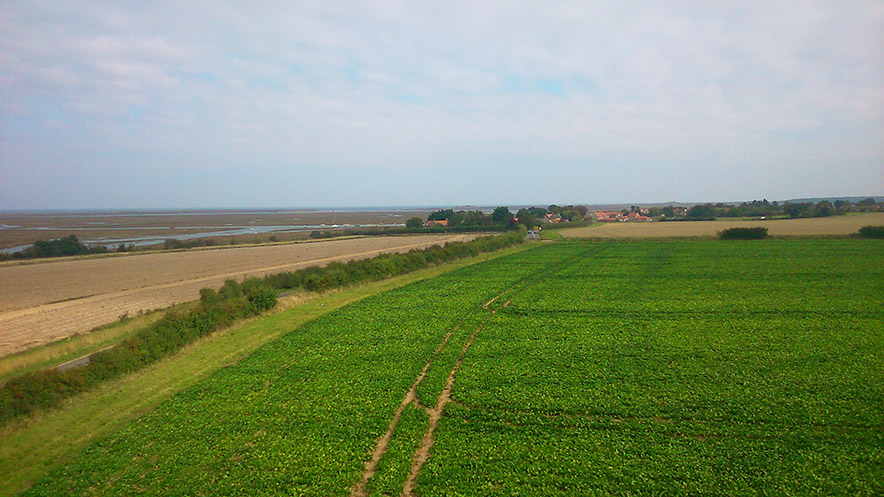 Apart from the coastal marshes and the inter-tidal area, the great majority of land in the area is arable farmland, where the primary function is the more-or-less intensive production of food. Although the majority of the most important wildlife sites are not on farmed land, arable farmland supports characteristic and sometimes rare wildlife.

Land close to the coast is particularly suitable for the production of malting barley because of its soils and climate. Other crops include potatoes and sugar beet, the discarded leaves of the latter providing a food source for the tens of thousands of wintering pink-footed geese.

Some grazing, predominantly of beef cattle but also a few sheep, takes place on coastal, river valley and other small areas of grassland, where maintenance of a suitable habitat for conservation is often a parallel or primary, purpose.

There are also some smaller areas of intensive outdoor pig and poultry units, and some where grazing land is used for horses.

For information on where you can buy locally produced food, see our local produce page or visit our Active Map.

From as long ago as the 14th century, periodic encroachment by the sea in low-lying coastal areas affected agriculture; and the subsequent construction of defence banks from the 17th century onwards changed the landscape.

Enclosure acts from around the mid 18th to mid 19th centuries changed the open fields, heaths and commons into an enclosed landscape, although some characteristics and features relating to the pre-enclosure landscape can still be found today. Enclosure took place largely without enclosure acts in some places, a notable example being the Holkham Estate, the largest estate in Norfolk. The general pattern of large, regular fields and large farms was produced by rationalisation in the late 18th/early 19th centuries and the estate was famous for the ‘Norfolk four-course rotation’ which was developed to sustain arable production on the generally light soils.

The intensification of agriculture after the Second World War, with mechanisation and the loss of grazing, led to huge changes in the countryside. In this century, statistics collected by the Government’s Department for the Environment, Food and Rural Affairs (Defra) for 2010 indicated that there were 142 agricultural holdings in the Norfolk Coast AONB, 67 (47%) of which were over 100 ha in size. About 15% of holdings were cereals totalling about 10,500 ha and another 55% ‘general cropping’ totalling about 5900 ha – a total of about 16,400 ha in arable production, about 63% of the total area involved in agriculture. The Defra survey recorded 95 full-time and 92 part-time farmers, 21 full-time and 17 part-time farm managers, and 116 full-time, 36 part-time and 36 casual employees; despite the large areas involved, relatively few people are employed in agriculture.

The woodland area is relatively small for England but there are important areas of ancient woodland and small plantations can contribute significantly to landscape character and biodiversity. They may also provide economic and recreational opportunities.

Based on work undertaken by the Norfolk Biodiversity Information Service in 2011, there are about 5,300 hectares of woodland (about 12% of the area), of which about 285 hectares are ancient woodland.

The most extensive areas of woodland, including softwoods planted for commercial forestry, are found mainly on the Cromer Ridge or in the western part of the area around Sandringham.

Otherwise, the woodland tends to be smaller plantations or shelter belts, often used as game cover although where accessible some woodland management and use of timber may be undertaken.

Our page with information on the farmland habitat within the Area.

Our page with information on the woodlands habitat within the Area.

Our page with information on the wood-pasture and parkland habitat within the Area.

The historical perspective and overview of the Norfolk Coast AONB gives more detail about agricultural and land use change.

Our page on local products and produce from within the Norfolk Coast area.