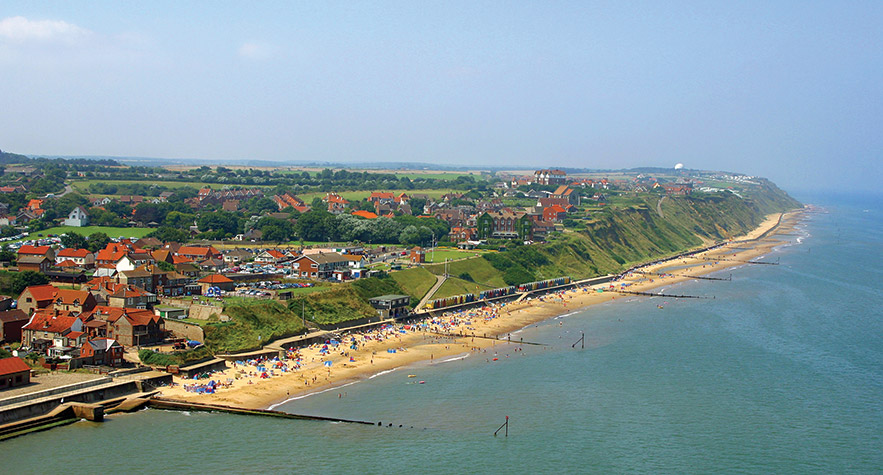 Coastal landforms developed in the Holocene period (i.e. since the end of the last Ice Age) between Sea Palling and Winterton-on-Sea by wind and water processes that remain active, influenced by human coastal defence interventions.

The below map shows the location of the East Norfolk Coastal geological landscape. Click through for a higher resolution version. 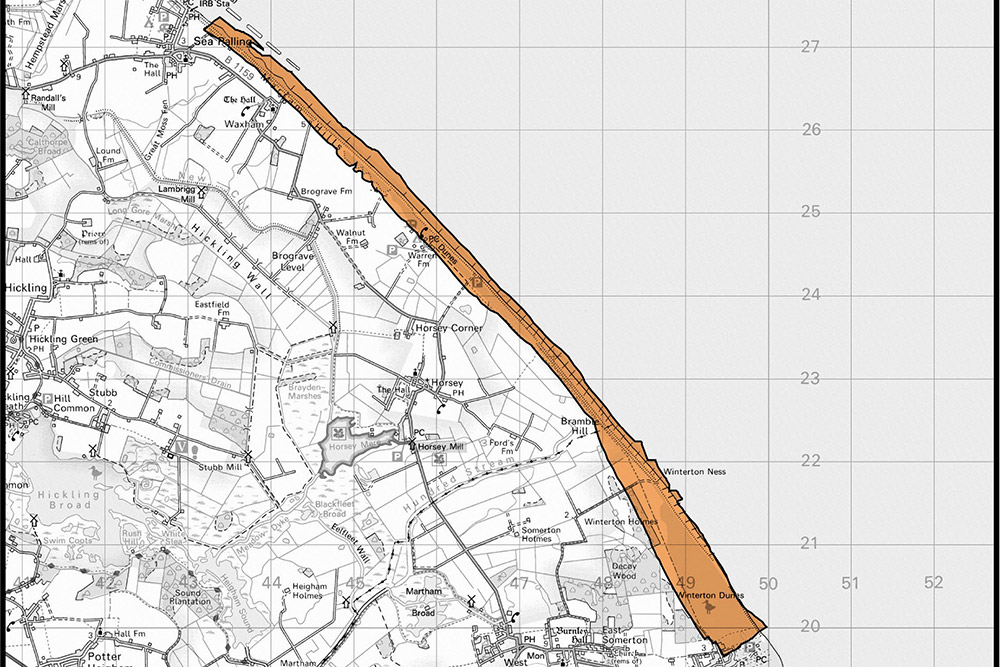 The coastline between Sea Palling and Winterton-on-Sea is a North Sea frontier landscape. In some places a mere 100 m (328 ft) fringing zone of sandy beach and dunes is all that separates the fury of tides and waves from the low- lying acres of drained and settled marshland beyond. The shifting promontory of Winterton Ness swells out seawards, backed by a complex of old dunes, a site of national scientific importance. As past history and the flood events of 1938 and 1953 bear witness, this is potentially a much more dynamic coastal landscape; tidal surges could easily breach the fragile sand barrier and flood the land behind them with seawater, were it not for the sea defences. Rising sea levels due to global warming are likely to make this challenge more acute.

The dunes between Sea Palling and Winterton are important nature conservation areas, designated for their dune landforms and associated plant communities. Interestingly, unlike the sand and shingle beaches of the North Norfolk coast, the beaches here are predominantly sandy. This reflects a different geological setting: the local bedrock consists of glacial deposits of the Happisburgh Formation from the early part of the Anglian glaciation overlying Norwich Crag (marine deposits from earlier in the Pleistocene period), and both rock types are rich in sand and readily eroded by the sea. The sands are blown into drifts and then fixed by marram grass to form mobile fore- dunes, which grade into a chain of semi-permanent dunes backing the beach. Currently their natural development is hampered by the concrete sea wall; in some places the dunes are isolated above beach level and are unable to interact with coastal processes and beach sediment and cannot roll back naturally. Over time, fresh ‘yellow’ dunes are stabilised and colonised by lichens, grasses and sand sedge to become ‘grey’ dunes. To landward, there are extensive areas of such ‘grey’ dunes at Winterton and Horsey, totalling over 160 ha (395 acres); some dunes are over 10 m (32 ft) high, but are only about a hundred years old. Interestingly, the chemistry of these dunes is acidic, unlike those in north Norfolk; the calcareous matter has been leached out, so giving rise to notable areas of dune heath and acidic grassland which resemble the dunes of the Baltic coast. There are also ‘slacks’, wet hollows between the dunes which have a marked hydrological regime linked to fluctuating inputs from rainwater and the water table; they are home to rare plants, dragonflies and the natterjack toad.

Winterton Ness is an important example of a ‘ness’, a beach foreland or promontory created by tidal processes. It is an unusually dynamic landform, and has given rise to several hypotheses to explain its shifting shape over the years. Northerly and southerly longshore tidal streams are thought to converge on the Ness, tending to build it outwards, although the details of the balance between erosion and deposition either side of the promontory seem to vary over the decades. At present the Ness seems to be shifting northwards. Also, the role of offshore ebb-flow channels and sediment banks in this system is complex and not properly understood.

This stretch of coastline has for most of its history been a changing frontier between land and sea. To the south lie the relative uplands of the Isle of Flegg. In Saxon times Winterton was a fishing village on the northernmost tip of the Isle, surrounded by tidal waters which extended as far north as Waxham. The remnants of an old line of cliffs can be seen running south from Winterton. As its name suggests, Horsey was an ‘eye’ or island at this time. Relative movements of land and sea have since transformed estuarine muds into low-lying marshland, but the sea is now attempting to reclaim them. The Mediaeval village of Waxham Parva has been lost to the sea, and the long-term future of settlements such as Sea Palling is uncertain. The chain of hard rock reefs recently constructed offshore have led to unintended consequences in neighbouring parishes, as the natural flow of sediment to beaches is disrupted and depleted.

Many people have heard of the devastation caused by the tidal surge of 1953, which breached the dune barrier at Horsey Gap and drowned seven people at Sea Palling. These sea floods are part of a story going back to at least the Middle Ages. The marshes behind the dunes are situated at very little above mean sea level, which makes them extremely vulnerable. Major events took place in 1250, 1287 and 1608; Faden’s map of 1792 shows nine separate sea breaches between Horsey and Waxham, with mud and sand washed into the marshes behind. The dune barrier used to be rebuilt with faggots of wood. Today, sea breaches are much less likely, because sheet piling and a concrete sea-wall now back the length of the beach from Sea Palling to Winterton, groynes have been reinforced with boulders, and machinery can be used to artificially replenish beach material.

This document contains further information about the five areas of geodiversity in the Norfolk Coast AONB. It also features information on geological stratigraphy, as well as setting out some key suggestions for conservation and enhancement work.