A large area of distinctive landforms and soils, forming a ridge about 30km long and up to about 5 or 6km wide from Langham in the west to Mundesley in the east, based on sands, gravels and clays deposited at the terminal edge of ice sheets in the Anglian glaciation over 400,000 years ago.

The below map shows the location of the Cromer Ridge geological landscape. Click through for a higher resolution version. 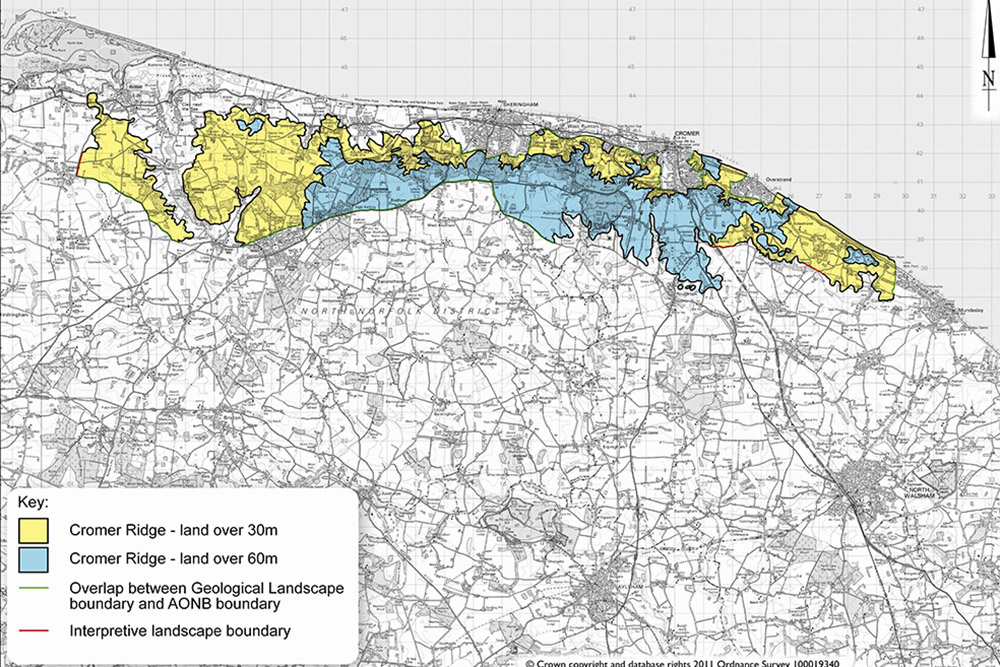 The Cromer Ridge landform is an important feature of the area. It forms a tract of high ground running east-west between Holt and Trimingham, and includes the highest ground in Norfolk at Beacon Hill, Runton (103 m / 338 ft). Surprisingly for such a relatively lofty feature, it is composed of a range of sands, gravels and clays. The origins of the Ridge lie about 430,000 years ago during the Anglian glaciation. The heart of the Ridge is a stack of glacial moraines – material eroded, transported and piled up at the edge of ice sheets. Colossal ice sheets, possibly over a kilometre thick, from as far away as northern England and Scandinavia are thought to have terminated here on more than one occasion, leaving a succession of glacial tills so complex and contorted that geologists are still debating their origins and timing. Anyone wishing to see the interior make-up of the Cromer Ridge needs go no further than the cliffs between Cromer and Trimingham, where marine erosion has cut a section through its eastern end.

The moraine deposits of the Ridge were laid down on earlier marine sands and gravels, known as the Wroxham Crag, over 600,000 years old; they in turn rest on eroded Chalk bedrock, as seen on the foreshore at Overstrand. During the Anglian glaciation, a succession of three tills (the Happisburgh, Lowestoft and Walcot Tills) were deposited in three glacial phases, and also a range of water-lain silts, muds, sands and gravels, forming an elongated moraine feature over 20 km / 12 miles long. In one place, at Sidestrand, slabs of chalk bedrock were torn up by the glacier and thrust up into glacial deposits, where they can be seen displayed in the cliffs. The complexity of the glacial deposits has combined with the local ground water to produce a dramatic sequence of landslips and mud flows along the shore, as seen at Overstrand and Sidestrand. Water seeps through permeable sands and gravels until it reaches an impermeable clay layer. A large mass of material above this lubricated layer may then slip across it and down the cliff face, taking a chunk of cliff-top with it. This variable geology also gives rise to the variety of habitats found in the cliffs, including bare sand, grassland, scrub, and marshy areas, which in turn support a varied assemblage of plants and animals, including national rarities.

The surface of the Cromer Ridge is covered with sands and gravels of the Briton’s Lane Formation, in some places up to 40 m / 130 ft thick, which give rise to acidic, sandy soils and heathy landscapes. They are thought to have been deposited by water gushing from the front of the last Anglian ice sheet which grounded along the line of the Ridge. In some places, such as Kelling Heath, Salthouse Heath, Roughton and Aylmerton areas of outwash gravel form important landscape features, gently sloping relict outwash plains with prominent scarped margins. In Mediaeval times the sands and gravels were exploited for a low-grade but valuable nodules of iron ore which they contain, and the traces of this industry are marked as ‘Iron Workings’ on Ordnance Survey maps, as at Weybourne. Today the only active local quarry (for sand and gravel) is at Briton’s Lane, Beeston Regis, which has been designated a Site of Special Scientific Interest (SSSI) for its geological interest, and provides useful fresh exposures for geological investigation.

The Cromer Ridge has been strongly altered since the Anglian period. The agents of erosion have been at work over the last 400,000 years, and have modified the Ridge and formed the hills and valleys we know today. South of the Ridge, erosion has acted on local variations in the glacial deposits to produce a gently undulating landscape with smooth contours. The contours on the north side of the Ridge tell a different story. Its crest has been lowered and its scarp has retreated southwards, leaving a series of distinctive denuded gravelly knolls behind, for example Incleborough Hill and Oak Wood, and a broad, eroded bench upon which towns and villages such as Cromer and Sheringham are founded. At the same time, the face of the Ridge became sculpted by stream action and spring- sapping under ‘periglacial’ conditions to produce a fretwork pattern of steep-sided dry valleys and intervening spurs of high ground, as can be seen round Beeston Heath, Pretty Corner and south of Sheringham Park. The valleys are floored with ‘head’ deposits which accumulated by ‘solifluction’ (downhill sludging of seasonally-thawed material in a cold, ‘periglacial’ climate).

The area north-west of the Cromer Ridge between Holt and Morston has a lower relief and has a slightly different geological story to tell. Here, the River Glaven drains northwards and cuts through a thin sequence of Briton’s Lane Sand and Gravels into underlying Anglian glacial deposits rich in chalk, the so-called ‘marly drift’. The soils west of the Glaven are generally more chalky than those to the east. The last Anglian ice sheet is thought to have retreated north- westwards in this area, and masses of outwash gravel were flushed from the decaying ice front, leaving first the Kelling Heath and later the Salthouse Heath outwash plains, and also a long, winding ridge of gravel known as the Blakeney Esker. Some of this water would have drained away southwards down the Glaven valley towards Briston.

Interestingly, the landscape in the Glaven valley area is dotted with dozens of gravelly knolls and mounds. The freshness of these knoll features is a puzzle to geologists, who debate their origin, some seeing them as local, eroded remnants of a once extensive sheet of outwashed gravel from material deposited during the Anglian glaciation. Others see them as relict ‘kames’ and ‘kame terraces’ deposited individually by outwash processes as the glacier retreated. A third view is that they were developed in a post-Anglian glacial period, while others have emphasised the role of agriculture over the centuries in accentuating relief. Some valley-side benches, for example The Hangs near Salthouse, may be ice-contact slopes, marking the position of the edges of ice sheets.