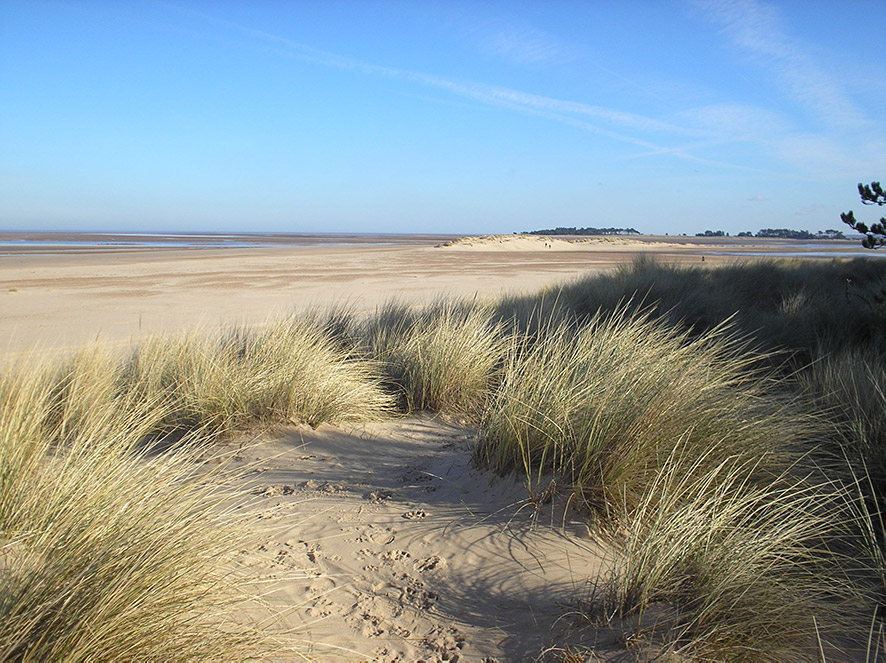 The sand dunes and shingle form part of the complex habitats that constitute the barrier system which has developed on the north and east Norfolk coast.

The main dune-building is done by marram grass, which is adapted to grow up through blown sand which covers it, building up the dune and stabilising it. As dunes mature, becoming protected from onshore wind and salt by new dunes forming towards the beach, they are colonised by many plant species and can come to resemble acid heaths or chalk grasslands. These more stable dunes can be dominated by lichens with sea bindweed, lady’s bedstraw, sand sedge and small spring annuals like spring whitlow-grass and early forget-me-not occurring.

As dunes grow old and lose height, they often develop low-lying areas, known as dune slacks, where water collects. Where they occur, dune slacks develop a fascinating flora and fauna.

The dunes at Holkham were planted with Corsican pine and Holme oak in the last century and both species are now naturalised.

Shingle is the predominant material forming the long ridge between Blakeney Point and Weybourne. On vegetated coastal shingle many plant species may be found, and these help stabilise the habitat and encourage colonisation by invertebrates and other species. The characteristic plant of the more disturbed shingle is the colourful yellow-horned poppy often growing with sea campion.

Ringed plover, oystercatcher and little tern are the most characteristic breeding birds on the shingle. In winter small flocks of shorelark, snow buntings, linnets and other finches frequent this habitat.

The invertebrate fauna of the dunes and shingle is rich with many species rare or restricted to this coast in Britain. There are two colonies of natterjack toads on the north Norfolk dunes breeding in pools at Holkham and Holme.

Where water gathers in depressions behind shingle ridges, small brackish lagoons may be
formed, with their own unique range of species. The lagoons along the stretch of coastline between Cley and Salthouse are home to one of the country’s only populations of the tiny starlet sea anemone.

The sandflats at the entrance to Blakeney Point hold a colony of common seals. 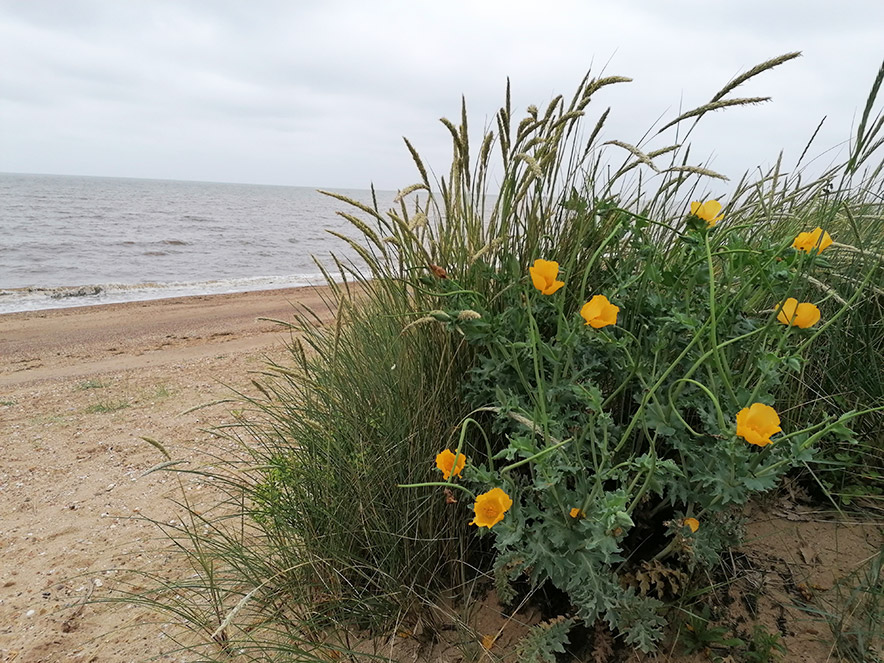 Dunes are fragile habitats and care should be taken to keep to paths.

The best places to see dunes and their characteristic wildlife are between Burnham Overy Staithe and Holkham, and at Winterton Dunes National Nature Reserve (where the acidic dunes have a distinctively different flora from the north Norfolk coast dunes).

Dunes also found in the Hunstanton to Holme and Thornham to Brancaster areas as well as Scolt Head Island and Blakeney Point.

The best place to see vegetated shingle is the long bank between Cley car park and Kelling. Vegetation is developing since management of the shingle by the Environment Agency has been relaxed.

Access and trampling can cause erosion and disturbance of the habitat. Management of public access helps to protect sensitive areas. Fences and boardwalks are used to allow normal dune fixation and reduce disturbance from trampling.

Dunes are dynamic features and blowouts are a natural and desirable feature of large dune systems, maintaining open conditions amongst areas of grassland and heath. Any dune stabilisation needs to be proportionate and to only go so far as to restore the natural conditions in the dune zone concerned.

Shingle vegetation is fragile; the wear and tear caused by access on foot, and particularly by vehicles, can easily damage sites. The best management practice for coastal vegetated shingle is to leave it alone.